Wow, “close call” is an understatement for this incident! This skydiver had a premature opening at break-off while another jumper was above him, luckily avoiding what could have been a fatal mid-air collision by mere feet.

Most of the causes of premature openings can be addressed before you even get on the plane. Make sure your rig is made for the jump you’re about to do. Make sure it’s being maintained properly. Make sure to get a gear check to ensure everything is where it’s supposed to be and you don’t have a pin that’s a millimeter away from popping or a pilot chute that is going to catch the slightest amount of air and slip out.

Unless you’re taking video for a specific discipline where you need to be directly overhead from a formation or shooting stills for evidence of a record attempt, there’s really not a good reason to fly directly above someone. A wide variety of dangerous situations, ranging from them corking out to them having a premature opening like this one, can make that a bad spot to be flying in.

It doesn't appear to have happened in this video, but it's worth noting that rubbing up against something in the plane or impacting another jumper in the air could also move your pin and make it more likely to give you a preemie.

Check out http://www.JoinTheTeem.com for the best skydiving and BASE jumping videos on the planet. Served fresh, daily. 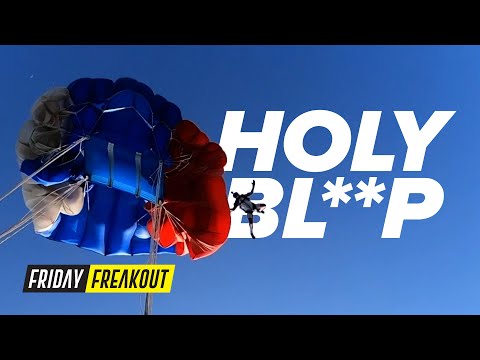